Several theoretical and experimental analysis were developed, with some original contribution, on the linear and nonlinear behaviour of stiffened, un-stiffened and sandwich cylindrical airplane structures under biaxial compression and shear load, by developing the software EALPATAR, MASTER5, POBUCK. The minimum-mass optimisation software OPTICO was also developed (Eurofighter EFA project). The effects of cut-out in advanced composite panels under biaxial load and shear were also evaluated. A new and original testing machine for applying biaxial and shear load were developed; it was built by AIP Studio (Fig. 1). A very good correspondence was obtained between the analytical results and the many experimental tests. 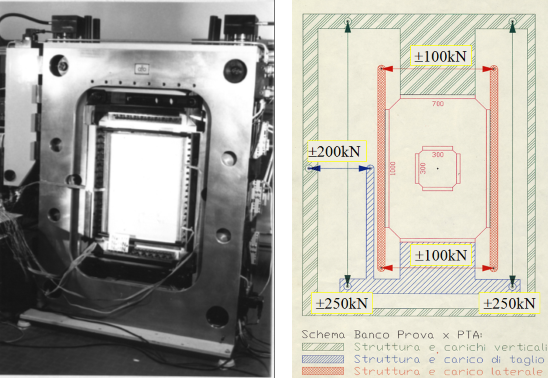 Analytical, numerical and experimental investigation on advanced composite wing boxes under pure bending or torsion, including effects of lateral pressure, initial imperfections and incomplete diagonal stress field. A very good correspondence was obtained between the analytical results and the many experimental tests.

Also investigated: the structural characterization (numerical and experimental, both static and dynamic) of advanced composite joints; the fatigue behaviour of stiffened and un-stiffened panels under biaxial compression and shear, including delamination areas produced by impact loads; the probabilistic approach in the design of advanced composite structures; and many others.